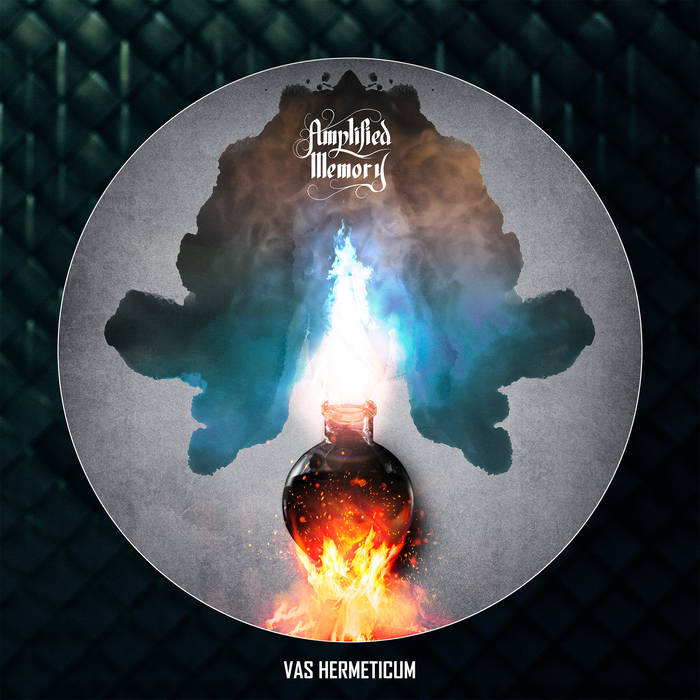 The psyche of a person can metaphorically be understood as a hermetically sealed alchemic glass vessel – a “vas hermeticum” – in which the condensation processes resemble the human ability to intellectualize (sublimate) and then realize (concretize) psychic content, therefore to reflect on it. Alchemists called this procedure inside this symbolic cosmic uterus “solve et coagula”.
AMPLIFIED MEMORY’s highly conceptual album “Vas Hermeticum” deals with the philosophical nature of dream and reality. On nine energetic, emotional, captivating songs and a hypnotically beautiful intro track they explore the world of hallucinations, near-death experiences and oneiric states as well as the questions for self-perception and the separation of those realms from what we call reality. While the foundation of the music lies in classic Gothenburg melodic death metal, the six young musicians from Munich, Germany experiment with several unconventional instruments and musical styles, giving the compositions a constant progressive character: A mind-expanding sax solo section in the eight-and-a-half-minute prog epos “A Walk on the Crystalline Path”, tragic violas and cellos in the dreamy and spooky ballads “Ammon’s Eclipse” and “Into the Shelter of a Mind” and even a black-metal-boogie with a bar piano solo in the tricky death-metal-track “End of Transference”. These and many more exceptional ideas as well as a powerful, organic production ensure that listeners will dive into this nearly one-hour melodeath journey through the human mind.

Necromance Digital Magazine (ESP): "[...] we can listen to almost 60 minutes of music without noticing even the slightest sense of repetition. It is unique from beginning to end."

Crossfire Metal Webzine (GER): "[...] a highly ambitious, diverse, complex and in all its parts listenable piece of work [...]"

Metal1.info (GER): "[...] devoting yourself to it pays off for anyone, who appreciates well-crafted melodic death metal and isn't afraid of looking over the rim of the tea cup."

The Rocktologist [Justin Hulford] (GBR): "The music explores loads of ideas and places, with each instrument having space to do something and then come together into a superb progressive fusion. There’s plenty of drive to the riffs with an underlying pace that keeps it flowing well."

The ProgSpace: "“Vas Hermeticum” is a great sophomore effort from Amplified Memory, with plenty of melodies and very interesting compositions all throughout. A worthy item for collectors who value and enjoy, for lack of a more concise term, “weird shit”."

“Vas Hermeticum” was written between 2011 and 2015 and recorded in March 2016.
Main arrangements by Simon Bodesheim, final arrangements by Amplified Memory.
Viola on tracks 4, 7 and 10 by Benedikt Holnaicher.
Cello on track 4 and 7 by Florinda Hoffmann.
Sax on track 3 by Simon Stusak.
Clean Vocals on track 7 by Isabella Niedermeier.
Clean and screamed backing vocals on track 8 by Emanuel Enki.
Noises at the end of track 10 by Amplified Memory.
Recording, editing and additional mixing by Konst Fischer at Dreamsound Studios.
Mixing and mastering by Jan Vacik at Dreamsound Studios.
Visual Design and artwork by Maximilian Kühn.

Dreams, recurring patterns, reminiscences, desires, the question about reality or simply the longing for the vast, undiscovered universe: All these things are in the focus of AMPLIFIED MEMORY, who work them up in their own innovative mixture of fast death metal, doom/black metal ballads and stomping midtempo beasts with a special focus on 90’s melodeath. ... more

Bandcamp Daily  your guide to the world of Bandcamp